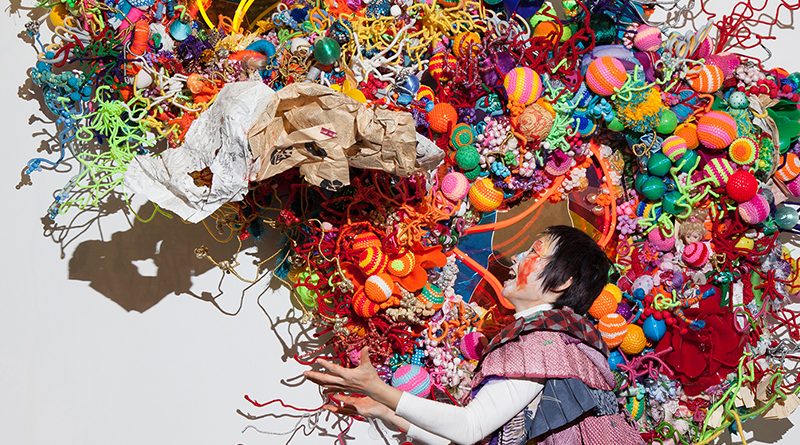 Art Student, Chiamaka Okenwa, answers the question, ‘What runs through the mind of an artist before the birth of a true masterpiece?’ This is a question that plagues everyone, especially in today’s chaotic world where your identity is easily lost.

The answer to this question is what I have set out to find in my visit to ‘Identities’, an exhibition at Denk Spaces. At the entrance to the gallery was a display by the exhibiting artist Erasmus Onyishi. What had at first appeared to be a mere tangle of wires and clutter took form upon more careful observation as a colony of ants marching up the wall. This mixed media piece, Openly Closed, was perhaps what opened our minds to the existence of other forms of art apart from realism, a concept we had been more or less closed off to.

Stepping into the building, eyes began to fill with wonder. Each separate work was a colorful and vivacious expression of the same, special theme: Identity. The exhibiting artists had identified themselves through their work by their choices of color, line, texture and form, and each work appealed to all of us in different ways. Konseling Online One of Henry Eghosa’s expressive works, depicting a woman in the process of dressing in traditional attire seemed to whisper, our culture is our pride. Stephen Osuchukwu, in his dignified rendition of an elephant herd, drew focus to the matriarch elephant whose leadership position is almost synonymous with its identity. This female cow is the oldest and largest in the herd and is responsible for leading the elephant herd. Their survival rests on her broad shoulders. On deeper reflection we realize that, perhaps, we are a sort of matriarch when we are given leadership positions.

Obinna Makata, in his work Beauty Deeper than Cosmetics II, leads us to realize the need to maintain our own unique identities in a world where society dictates what to wear, how we should look and, ultimately, who we become. Another work of his, Of Race and Identity, tells us Africans that we do not truly conform to the label [Black], but our identities are rainbows of color, because there is a splash of something special in each and every one of us. His artful employment of Ankara emphasizes individuality. Lowongan Kerja Just as each Ankara pattern derives its beauty from its unique pattern, so we derive our own from our difference in identities.

Promise O’nali, whose novel style would identify him in the farthest corners of the world, gives us another take on the term, identity. Because who are we, really? It is something to be deeply reflected upon. His works, in a cool and simple manner, induce the viewer to observe the intricacy of man’s journey through life, and the constant battle to maintain his true self.

At the end of this truly inspiring and eye-opening exhibition, I returned almost on a different plane of mind. I had taken away one general lesson. In the words of Mr. Nnoli, “Art is always involved in our lives… It opens the door to our individual creativity.”

And indeed, I have truly been inspired to open those doors, and reach for the magic in more creative ways.